WHAT IS THE MICROBIOME? 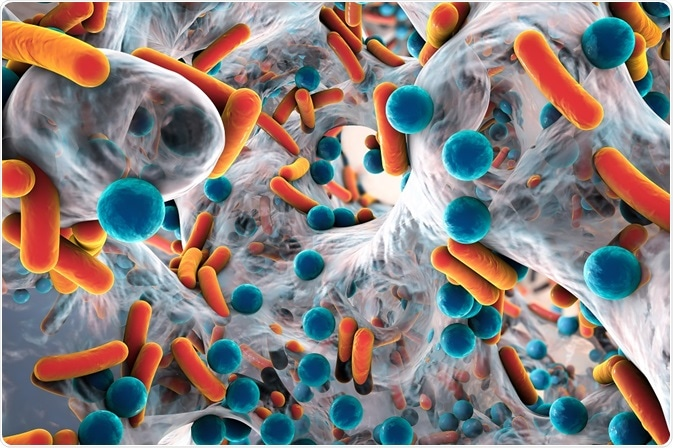 The microbiome consists of trillions of microorganisms (also called microbiota or microbes) of thousands of different species. These include not only bacteria but fungi, parasites and viruses. Microbes outnumber our human cells ten to one. These “bugs” coexist peacefully, with the largest numbers found in the small and large intestines but also throughout the body.  The number of genes in all the microbes in one person’s microbiome is 200 times the number of genes in the human genome.

Each person has an entirely unique network of microbiota that is originally determined by one’s DNA. A person is first exposed to microorganisms as an infant, during delivery in the birth canal and through the mother’s breast milk. Later on, environmental exposures and diet can change one’s microbiome to be either beneficial to health or place on at greater risk for disease.

Most of the microbes in our microbiome are symbiotic and some, in smaller numbers, are pathogenic. In a healthy body, pathogenic and symbiotic microbiota coexist without problems. Proteobacteria, Bacteroidetes, and Archaebacteria are considered the major bacterial taxa. Residing in the intestines, these diverse microorganisms develop elaborate ecological networks through interactions with other bacteria to obtain nutrients required for their colonization and proliferation. When the intestinal microbial communities collapse or become unbalanced due to a variety of causes such as infectious illnesses, drastic changes in dietary habits, chemical toxic substances, or prolonged use of antibiotics or other bacteria-destroying medications – dysbiosis occurs, stopping these normal interactions. As a result the body may become more susceptible to disease.

ANTIBIOTICS ALTER THE BALANCE OF COMMUNITY AND FUNCTION OF INTESTINAL MICROBIOTA.

Antibiotics are generally administered to kill specific microorganisms; however, since most antibiotics have a wide range of effects, they also affect related microorganisms. These effects are imprinted in the intestinal environment for several months after discontinuation of the dosing. The effects of the antibiotics on the taxonomic composition of intestinal microbiota change regardless of the kind of antibiotic.

Anaerobic bacteria account for a large proportion of the intestinal microbiota and play an important role in the development of intestinal immunity. These organisms produce volatile fatty acids, such as butyrate, which activate immune cells to help maintain a healthy gut. Clindamycin, a broad-spectrum antibiotic against anaerobic bacteria, is released from bile after administration and accumulates at high concentrations in the feces, affecting the composition of the intestinal microbiota for a long time, even after discontinuation of dosing. Clindamycin is known to have the greatest effect on the function of intestinal microbiota that shows resistance to the pathogenic bacteria C. difficile. Studies of the effects of clarithromycin, metronidazole, and omeprazole on the composition of the pharyngeal and fecal bacterial taxa show that these antibiotics may affect 30% or more of the microbiota composition, and although the microbiota may partially recover, the effects can persist for at least 4 years after exposure.

CAN DIET AFFECT THE MICROBIOME?

In addition to family genes, environment, and medication use, diet plays a large role in determining what kinds of microbiota live in the colon. All these factors create a unique microbiome from person to person. A high-fiber diet in particular affects the type and amount of microbiota in the intestines. Dietary fiber can only be broken down and fermented by enzymes from microbiota present that would survive in the acidic environment. The lower pH limits the growth of some harmful bacteria like Clostridium difficile. The fermentation of indigestible fibers causes the production of short chain fatty acids (SCFA) that can be used by the body as a nutrient source but also play an important role in muscle function and possibly the prevention of chronic diseases. Growing research of SCFA explores their wide-ranging effects on health, including stimulating immune cell activity and maintaining normal blood levels of glucose and cholesterol. Clinical studies have shown that SCFA may be useful in the treatment of ulcerative colitis, Crohn’s disease, and antibiotic-associated diarrhea.

Foods that support increased levels of SCFA are indigestible carbohydrates and fibers such as inulin, resistant starches, gums, pectins, and fructooligosaccharides. These fibers are sometimes called prebiotics because they feed our beneficial microbiota. Although there are supplements containing prebiotic fibers, there are many healthful foods naturally containing prebiotics. The highest amounts are found in raw versions of the following:
Garlic, onions, leeks, asparagus, jerusalem artichokes, dandelion greens, bananas, seaweed.

In general, fruits, vegetables, beans and whole grains like wheat, oats and barley are all good sources of prebiotic fibers.

The microbiome is a living dynamic environment where the relative abundance of species may fluctuate daily, weekly, and monthly depending on diet, medication, exercise, and a host of other environmental exposures. A person’s microbiome may influence their susceptibility to infectious disease and contribute to chronic illnesses of the gastrointestinal system like Crohn’s disease and IBS. Researchers mapping the human microbiome are discovering previously uncharted species and genes. However, scientists are still in the early stages of understanding the microbiome’s broad role in health and the extent of problems that can occur from an interruption in the normal interactions between the microbiome and its host.